Remember the value of storytelling We remember a media agency training deck from years ago telling us it was around 3,000. But we knew that number would probably be out of date by now as advertising has grown so much.

Because, latest estimates put the average number of adverts per person at somewhere between 6,000 and 10,000 a day.

That’s a lot of advertising.

So, it’s important for your advertising and media to stand out from those 7,999 other adverts. To get noticed, be remembered and make customers do something.

The success rate of advertising

Because, think about how many of those 8,000 adverts actually have any impact.

In fact, think about adverts you’ve seen or heard today. How many did you notice? How many can you actually remember? And more importantly, how many actually persuaded you to do something?

Let’s be generous and say you might have seen 8 impactful ads today. (it’s probably less, but it makes the maths we’re about to do easier).

Suddenly the creative team, the client and the media agency start to feel a little nervous. Because, after all, who wants to do something that fails 99.9% of the time? Someones’s paying for that level of failure.

But, here’s the thing.

Thinking one advertising spot drives sales is like thinking one walk around the block makes you healthy.

It’s not how it works. Repetition is the key.

Advertising and media works best when it’s repeated over time. As per our media planning guide, frequency of advertising influences the impact it has.

You’re more likely to notice, remember and be persuaded by advertising which you see many times, rather than one time.

Plus, every customer your advertising persuades to buy, doesn’t necessarily just buy that one thing, one time.  They’re likely to buy it again.  So the value from advertising has to look long-term. Advertising can create loyal customers who drive repeat sales too.

But there’s also many other ways to make advertising work better. And one of those is storytelling. Storytelling can add a lot of value to your advertising.

Let’s look at the value of storytelling in doing those things.

First, storytelling is a great way to take complex topics, and make them easier to understand.

For example, let’s say you wanted to explain some of the challenges in international advertising. Your business is based in one country, but wants to expand its reach overseas. That happens a lot, right?

It’s no secret cultural norms differ internationally. Advertising which works well in one country, won’t necessarily work in another, because of culture. But how do you explain that?

You could share studies and research and quote statistics to explain it. If it was for a course or training session, you’d definitely do that, right? And people are (mostly) smart. They’ll probably get it.

But how would you get the point across if you’ve only got a 2 minute conversation, or a few hundred words to explain it? And do it in a way, that’s easy to understand.

Well, that’s where the value of storytelling and stories come in. And that’s basically an excuse for us to tell one of our favourite marketing stories.

A story about a stag selling whisky

It comes from the world of whisky. Though the point of the story isn’t actually anything to do with whisky. Not really. It’s about international advertising and cultural norms.

We wanted to put a link to the source of the story, and the advertising it refers to. But, despite a lot of searching on Google this morning, we can’t find either. Probably, usage rights somewhere stopping it being put up on You Tube.

So, you’ll just have to trust us that it happened. And to be honest, it’s too good a story to be made up. We know it’s a good story, because we can still remember it. And that’s important. Because you can use that same principle when you create advertising.

The story in one of the marketing magazines was about Glenfiddich, the single malt scotch whisky. It had just created a new global advertising campaign, which featured the stag (it’s their logo / symbol from the front of the bottle) walking though an eerily deserted city landscape.

As we said, that ad surprisingly isn’t on You Tube that we can find, but this one is similar.

So, the story was they tested this advert in 8 of their 10 biggest markets.

Like “Top 2” boxes in preference, high likeability and intent to purchase. All that pre-test stuff which market researchers get excited about.

Except for two countries

The word “stag” in Brazil Portuguese is derogatory slang for homosexual. And, in Latino cultures at the time, homosexuality was way less positively accepted than it is now.

That aside, the word can also be used to mean f*cker. And not in a good way. That’s probably, not the association Glenfiddich would want. So, the advert didn’t run there.

But more interestingly, it didn’t work in Germany, either. For an entirely different reason, though.

Because, German culture and thinking is strong on literal thinking, not lateral thinking. Advertising which features analogies or symbolism generally don’t work there.

In this case, research showed respondents queried how the stag could be in the city. “Because, stags live in the forest, not the city.” Imagine that sentence in a German accent.

That logically makes sense. But clearly, German whisky drinkers just couldn’t get what the advert was trying to symbolise. The ad never ran in Germany.

Now, if someone asked us to explain how advertising works in either Brazil or Germany from a cultural perspective, before we heard this story, we’d have struggled. We’ve have probably ended up talking about football or something, given both countries are so good at winning World Cups.

But with this story about the Brazilian slang word, and the German literalism, you get the point quickly, right? It’s a nice easy way to show the value of storytelling to make difficult topics easier to understand.

The value of storytelling - heroes, guides and journeys

For the next lesson in storytelling, we step away from advertising, and into the world of reality TV. No, not Celebrity Love Island, But our favourite show of the last few weeks, and that’s Junior Masterchef.

Watch any Masterchef, and you can see the producers are as much Master-Storytellers as the contestants are Master-Chefs. Story is important to how that show works.

The story structure of the series always starts off with us meeting the “heroes”. The contestants, in this case. We get to understand their “quest”, one of the 7 story types Christopher Booker outlines in his book, the 7 Basic Plots.

Their quest is to win the competition, and show they’re the best cook. We meet their “guides”, the judges and guest chefs and food critics who help them when they get stuck. We follow their “journey” as they have ups and downs along the way.

And here’s the masterful part of the storytelling.

The downs and ups of Masterchef

If you focus on the “downs”, the contestants who hit a wall, or something goes wrong so they need to re-do a part of the recipe, they’re almost always the ones who succeed in the end.

Those fondants with no ooze. Those panna cottas with no wobble. Or, that risotto with the wrong texture.

It’s the story of their comeback from these set-backs which make you root for these contestants. (and we obviously mean the more mainstream meaning of the word root, not the rude Australian one). We feel a stronger emotional connection to people facing a challenge. The drama hooks us in.

Much more so than the ones who get it right every time. You know those ones. The perfectionists. Undoubtedly talented. But less interesting to watch. And you don’t root for them.

You root for the ones who overcome challenges. The ones who show more character. They’re more watchable. And, more likely to make it to the end. They make for a better story.

If you know about character archetypes from storytelling, you could argue the contestants were all playing the role of Child / Innocent. But this season’s Junior Masterchef did a great job of bringing out the additional character types behind that.

We had the Joker / Jester archetypes of Filo and Ben. Two future comedy stars, if they don’t make it in the food world.

We had the Caregiver archetypes like Carter and Dev. They went out of their way to be supportive, polite and helpful to the other contestants.

And we had the Creator types like Ruby and Laura who experimented with what’s possible with food. Their character type was to push the boundaries and take the cooking skills to another level.

And then of course, finally, Georgia, the eventual winner. The tiniest contestant of the group. But fiercely determined and proud to bring her Sri Lankan and Australian food heritage to the competition. The one who battled against the odds to win, which meant she had the best story as well as the best food.

The value of storytelling - stir the emotions

We close this article on the value of storytelling with a brand that’s clearly going to be in pain right now, and that’s Qantas. But as we covered recently, they’re just about surviving. And we did hear one of their planes fly overhead as we were writing this.

Because those stories would be about Qantas. And actually, they see what they do for their customers as more important than telling people about Qantas. Because the stories in their advertising, they make the customer the hero, the people who use Qantas.

And that leads to some memorable advertising, just like this one.

We first saw it in an Adobe marketing technology conference at the Sydney Opera House. Qantas do a lot with Adobe, and the Qantas marketing director gave the audience a sneak peak of this, their new (at the time) advertising.

After it ended, you could hear the audience of hardened marketing professionals gulp. There’s some serious emotional “feels” with this story which touches the soul of the average Aussie.

Because that long journey home is an experience anyone who lives in Australia has felt.

It taps into deep emotions people feel when they reconnect with friends and family after a long journey home.

And Qantas is there as the guide to help their customers along the way.

The way they tell the story in this advert?

For Australians, there’s no one else you’d want to come home with, than Qantas.

So, if you do want your advertising to be in that 0.1% of advertising that’s noticed and remembered, work out how you can tell a great story, that makes the customer the hero.

Because that’s what the value of storytelling can do for you.

Unless of course, you want to learn more about storytelling from our skill guide. Or you want to contact us, to help create and build your story. The role of packaging in growing your brand

Why read this? : We look at the role of packaging in growing your brand.  Learn about its role in reinforcing your brand identity. Learn 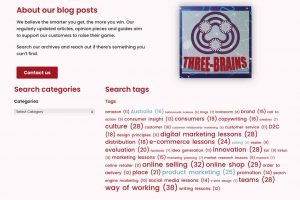 The benefits of blogging for brands

Why read this? : We look at the benefits of blogging for building your brand. Learn which customer needs blogging can help you meet. We also 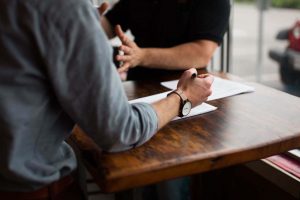 What to look for in an e-Commerce agency

Why read this? : We go through the types of services an e-Commerce agency can offer you. Learn how they can help you build a strategy